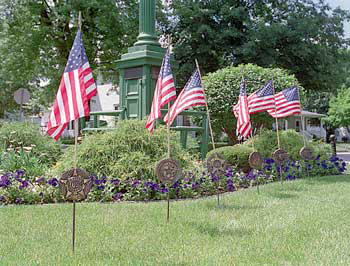 HISTORY: The city of Ligonier was founded in 1835 by Isaac Cavin, who built a settlement along the banks of the Elkhart River, in an area known as Strawberry Valley. He named the town after his hometown of Ligonier, Pa.

The town experienced slow growth until the railroad was constructed in 1852. At about the same time, Solomon Mier and Jacob Strauss, two Jewish immigrants, settled in the area and other Jewish people began to follow. Between 1852 and 1866 the town’s population grew from 50 to 1,100. In 1952, a group of local businessmen formed an industrial development committee, and began transforming Ligonier into an industrial city. Today, the city boasts a large industrial park, with several large employers.

SERVICES: Sewer and water is provided by the city, and trash pickup is contracted by the city. Ligonier’s police department has nine full-time members, which is supplemented by an active reserve police unit. Three full-time firefighters are aided by several volunteer firefighters.

RECREATION: Ligonier has many parks, the largest of which is Kenney Park on West Union Street. The Ligonier Sports and Recreation Center in Kenney Park has a full gym and two fitness rooms, as well as a public meeting room with kitchen facilities. In 1993, the Jennie Thompson Garden, a scenic walkway in a garden setting, was added to the park. Most recently a splash pad was added to the facilities at Kenny Park.

FESTIVALS: The Ligonier Marshmallow Festival is held each Labor Day weekend; attendance is well over 10,000 people. The Stone's Trace Pioneer Crafts Festival is a popular festival held the weekend after Labor Day at the Stone's Trace grounds, three miles south of the city. It also boasts large attendance figures. In October, Fashion Farm hosts the month-long Pumpkin Fantasyland, a unique attraction started by the late Charlie & June Williams and is now run by the couple¹s children and grandchildren.