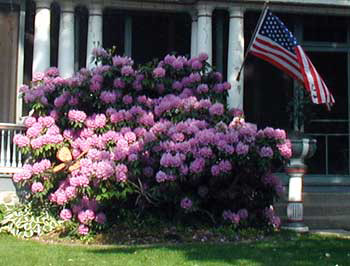 A new wave of volunteerism has taken hold in Ligonier, helped in part by Operation Foundation's Restoration Week. Hundreds of volunteers have logged thousands of hours working in all parts of the city. They have fixed up homes and businesses, spruced up parks and helped put a fresh new face on the community. This faith-based initiative has become an annual event that continues to enrich our community.

A new mural program, which changed drab, ordinary walls in the city to colorful works of art, was started in 2007 and continues to grow. As of this date the city has been graced with nearly a dozen murals. The Future Ligonier Alliance is the guiding force behind this and other changes in the city, including the American flags that are proudly flown in the redeveloping downtown.

Tourism continues to be an asset for Ligonier and for anyone wanting to get a feel for the history of Ligonier, all it takes is time to visit several top-notch attractions that showcase the city.

First stop should be the Ligonier Visitors Center, housed in a 1920s filling station at the stoplight on the corner of S.R. 5 (Lincolnway South) and West Union Street. There you can visit the Heritage Station Museum which has a fascinating & diverse collection.

Just one block west of S.R. 5 is Ligonier's beautiful tree-lined main street. There you will find lovely three-story homes as well as the Ligonier Historical Museum, the city's Carnegie Library and Gazebo Park.

The Ligonier Historical Museum was built in the late 1800s as a Jewish Temple and features beautiful stain-glass windows. The museum is home to more than 1,000 artifacts relating to the city¹s past. It is operated by volunteers and is a treasure to the city's residents.

On Lincolnway West is "This Ole House," a memories museum that is filled with memorabilia from one family's treasures. It's part of the Fashion Farm complex which includes Fashion Farm restaurant & Pumpkin Fantasy Land.

Travel south of Ligonier on S.R. 5 and US 33 to find Stone's Trace museum, house and tavern. Hours are Sunday afternoon or by appointment.